Takrut, is a type of tubular talisman that originated from Thailand. It is also known as "Tangkai" in other cultures. They are worn by Thai people as a protective amulet and have existed for thousands of years. They are by rule, a talisman that is an elongated shape, taking the shape of a scroll. The scroll can be made of any type of metal such lead, tin and copper sheet are appropriate for warding off danger, accidents, sharp weapons and bullet fires (Kongkrapan or invulnerability), authoritative power (Maha Amnat) dispelling evil forces and scheming characters.

Those made from silver and gold are appropriate for dispelling off demons or dark evil forces and it has the capability in helping the wearer to attract kind benefactors, accumulate wealth fortune (Pokkasap) and gaining good affinity with people (Metta Mahaniyom)

Besides metal, Takruts made from paper, leaf, papyrus, animal skin, or a large number of other mediums, including bamboo and wood vines. In whichever form of material it may be made from, it always come with a written Yant scripture and further sanctified by the master maker to make it efficacious. They are mostly worn on a cord around the waist, but are also often seen accompanying amulet on neck chains.

Thais strongly believed in the power and sacred magic of Takrut for its effects in offering protection and increase serenity of mind to the bearer. This occult practice had a long history since the Ayutthaya warring period that is still very popular until today. Takrut is usually worn by Thai men on a waist cord for its protective efficacy (Kongkrapan) against harm and danger and on the neck for authority (Maha Amnat). Takruts are usually put inside a special type of case and worn with a chain around the neck at chest level. They are also worn about the waist but can also be worn as most pieces of jewelry. They are worn about the body to protect specific parts of the body or to grant power to those body parts. But whether it is worn at the chest or the waist, its purpose is still the same: to give protection to its wearer.

In retrospect, Takrut talisman is very popular with people in dangerous professions such as police or military. However, the usage of Takrut does not only confine within these dangerous profession alone. Anyone can carry this talisman for added protection or for a special purpose as specified by the maker. It works similarly with any other type of contemporary amulets but just that amulets can have various designs and can contain many materials.

We can conclude that Takruts and other contemporary amulets are in the same talisman platform to offer safety, protection and blessing to the wearer. There is no known restriction about wearing Takruts and amulets at the same time as they are relatively compatible.

Small tiny holy Takruts are also popular for insertion into sacred amulets particularly those of powder based. Takrut can be easily into powder/herb based amulets during the making process. With the advent of high tech casting method today even metal based amulets can be embedded with takruts with very fine prints. 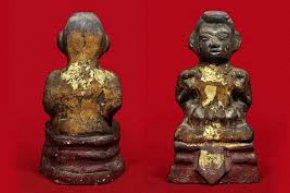 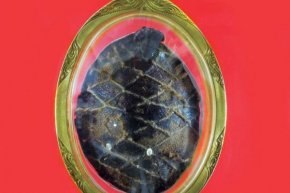 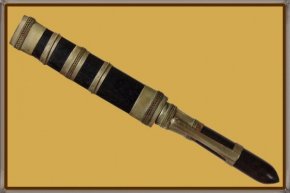 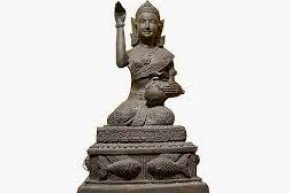 NangKwak (The Goddess of Wealth)