Luang Pu Tim Isrigo, formerly known as "Tim Ngamsri", was the son of Nai Jae and Nang In. He was born in Ban Huatungtabutr Village, Village No. 2, Lahan Sub-district (present is Moo 1, Nong Bua Subdistrict), Ban Khai District, Rayong Province. He was born on Friday, 16 June 1879 (B.E. 2422), the second child of the family.

When he was 17 years old, his father brought him to stay with Luang Pu Singh (Wat Lahan Yai) for studying Thai books and Khmer script for about 1 year, after that, he asked Luang Pu Singh leaving back to help his parents with housework until the age of 19, he was selected to be soldiers and stationed in Bangkok for 4 years until discharging and returned back to his hometown. His father asked him to ordain in Buddhism at Wat Tabma and Phra Kru Kao was his preceptor. Ordination ceremony was held on June 7, 1906 (B.E. 2449), corresponding to the year of the Goat, the month of 6, Saturday, 7 lunar night. He was nominated as "Isrigo"

After the ordination, he studied in the practicing of the meditation from Luang Phor Singh, as his teacher, and studying in various subjects from the couple texts of Wat La Han Yai (Understanding that the original version belonged to Luang Pu Sung Thao). Until his knowledge has become well-versed then, he went out to hike in many provinces of Thailand with Luang Phor Yod in order to develop morality and find seclusion for 3 years. When approaching Buddhist Lent, he returned to Chonburi Province and stayed at Wat Na Matoom during the Buddhist lent for 2 years and traveled to study additional subjects with many monks and layman. Afterwards, he came back to stay during the Buddhist Lent at Wat Lahan Rai and received an invitation from the villagers to become the abbot of Wat Lahan Rai since 1907 (B.E. 2450)

He had renovated cubicle and surroundings in the temple. Besides, Luang Pu Tim Isrigo had finished building the chapel with his charisma on Sunday, June 16, 1974 (B.E. 2517), which corresponding to the 95th years anniversary. Luang Pu Tim laid the foundation stone of the Sermon Hall named "Phawana Phirat" and completely built in the year 1975 (B.E. 2518). After that refectory hall was renovated named "Uttamo" Hall. His last Buddhist position was "Phra Kru Phawana Phirat" (provost) but the villagers were generally called him "Luang Pu Tim".

He died of old disease at 11:00 pm on October 16, 1975 (B.E. 2518) at the Chanting Hall of Wat Lahan Rai. After admission at Somdej Na Sriracha Hospital for 23 days, his body was kept and store on the Phawana Phirat Pavilion at Wat Lahan Rai. By requesting the royal cremation ceremony, the cremation which was held on March 6, 1983 (B.E. 2526), at the cremation hall Wat Lahan Rai. Luang Pu Tim Isrigo, who acted as a monk and adhered to the dharma and discipline of the Lord Buddha, reclusive in the form of taste, smell and sound. He had one meal daily at around 7.00 am. without lunch meal and tea again around 4 pm. That was all his daily eating. He was vegetarian. Most of his food were vegetables, nuts or chili paste with salt. He practiced these over 50 years, nevertheless, his body and skin still remained fresh and good healthy as normal. This was probably from his accumulated prestige and being strictly practicing in dharmma discipline. He lived up to 96 years, 72 years of age in ordain and died of natural cause. On October 16 of each year, Wat Laharn Rai and his disciples will join to organize annually commemoration ceremony to Luang Pu Tim, which have many people joining together.

Phra Khun Paen Plai Kuman is one of the most famous amulets created by LP Tim of Wat Lahanrai. His amulets are very popular and expensive but for good reason.

A popular account has been well publicized around the internet. This is an updated and somewhat more accurate version.

Phra Khun Paen Pong Plai Kuman of LP Tim Isarigo, a senior monk of Wat Lahanrai, Rayong province, is respected as one of the most sacred amulets consecrated in modern times.

A genuine Phra Khun Paen Plai Kuman amulet is probably the hardest to find, and fakes abound everywhere. This amulet is well proven in Metta Mahaniyom, Metta, Mahahsaneh, business success and almost all that you wish to do.

The actual methods used to create this amulet follow the ancient traditional ways. Only a few guru monks are known this century to be able to create such an amulet, namely LP Tim himself, and Luang Phor Tae of Wat Sahm Ngam.

The most popular series of the Phra Khun Paen Pong Plai Kuman amulets are known as the first series (often called â€œthe first block containing both Pim Yai and Pim Lek, some with sacred takruts and others without.

It is generally believed that LP Tim had asked a disciple to make the amulets for him and on a daily basis he would bring newly made amulets to the temple and then Luang Pu Tim would gradually recite the sacred spell for each and every amulet.

Indeed it was recorded that 30-40 of the Pim Yai amulets and around 100-200 of the Pim Lek amulets were brought to him daily.

The disciple responsible for making the amulets was known to have stated that only a single mold was created for both the Pim Lek and the Pim Yai amulets. LP Tim did not make further molds

Many dealers may claim to possess amulets that have originated from different series, but be warned you are most likely being deceived.

One of the reasons that such a low quantity of these amulets were produced was no doubt due to the difficulty and danger associated in production. As stated previously it was well known among experts of the black magic sciences that only a few monks possessed the arcane knowledge required to produce such an amulet.

If lesser persons attempted such a process it is highly likely that they would themselves become possessed with demonic spirits or harmed in some way. Luang Phor Tae of Wat Sam Nagm was the only other living monk who possessed the knowledge.

Mr. Lap Choicharoen, a close disciple of LP Tim had said that he was instructed to locate the corpse of a pregnant woman who had passed the cremation ceremony on a Tuesday.

Furthermore he was to bring the burnt head bone of the dead foetus to Luang Pu Tim. This was required in order to create the sacred powders used in the preparation of the Phra Khun Paen Pong Plai Kuman amulets.

LP Tim chanted a special black magic spell or Katha for one week in order to control the soul and also prevent the spirit departing from the Plai Kuman.

Once completed, his disciple was instructed to pound and grind the material into very fine powder, which he commenced to do. It was not long however that he became somewhat disturbed by sparks emanating from the mortar. He had to burn incense and ask for forgiveness before this phenomena abated.

LP Tim took the Plai Kuman powder and mixed it with a number of other sacred powders including, Itijeaepattamung powder, Jindahmanee powder, Prawai and 108 different herbs and sedges. The mixture was chanted for days on end before being pressed into the molds.

The Pim Yai amulet is 3.5 cm in length and 2cm in width. The amulet face features Buddha sitting in Samadhi, to his left and right are two Nang Kwak in prayer.

On the reverse is the famous LP Tim Yant Har, representing five previous Buddhaâ€™s. Certain Pim Yai, mostly the Neua Khao versions, have a pair of takruts inserted and a layer of gold paint applied.

A total of 2,000 pieces were created and chanted, some with and some without the takruts.

Once his disciple questioned LP Tim on the reason why he chose to use the skull of a dead child in the process. He was answered

The Pim Lek is slightly smaller in dimension being 2cm in height and 1cm in width. The amulet face features Buddha sitting in the full lotus position, below which is a sleeping Guman Thong. To the left and right are two Nang Kwak, believed to impart Metta Maha Saneh (loving kindness). The reverse of the amulet once again features the 5 Yant inscription.

A total of 5,000 pieces were created with 20 pieces made with Wahn Maha Saneh and Dtoktorng powders. These powders are considered special and generally difficult to find. Clearly these versions of the amulet, being the rarest, are by far the most expensive (generally yellow in colour).

The colour of the amulets varies depending on the final mixes of the scared powders used, and the varying degrees of pressure used in the molding process.

Particular amulets when viewed under magnification even show signs of their origin, often containing fingernails and hair.

The Plai Kuman was also added to other batches of amulets, namely; Phra Nangphya, Phra Plaai Buar, Phra Pitda, Phra Kring Chinabahnchorn and Phra Somdej. In the case of the Phra Kring amulet the material was added to the base. 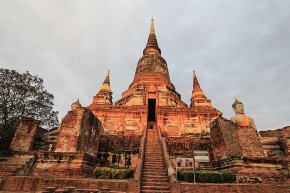 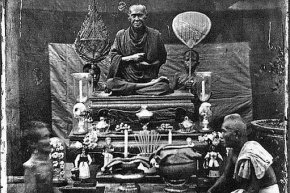 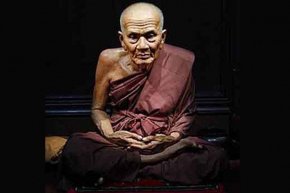